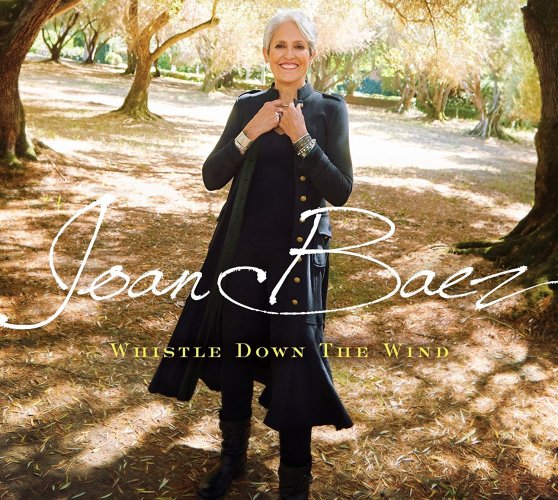 On Whistle Down the Wind, intended as the curtain call of a legendary recording career, Joan Baez says goodbye—all the while acknowledging that it’s never quite that easy. Think of the poet Adam Zagajewski, who exhorts us to “praise the mutilated world.” And think of Mary Oliver, who writes: “To live in this world you must be able to do three things: to love what is mortal; to hold it against your bones knowing your own life depends on it; and, when the time comes to let it go, to let it go.” The songs on Whistle Down the Wind are love songs to a mutilated world and a beleaguered humanity, their weariness and valor resonating as much today as they would have at any given point in Baez’ recording life. But love songs they remain: In her trembling read of Anhoni’s “Another World,” a throbbing and delicate album highlight, Baez sounds like she’s stepping onto a train and already regretting her departure; she can’t articulate her search for a better world and a higher plane without rhapsodizing about this one. “I’m gonna miss the birds/ Singing all their songs/ I’m gonna miss the wind/ Been kissing me so long,” she sighs, holding fast to the mortal world in all its ephemerality and imperfection, still the surest thing she’s ever known. Or, as Baez sings on the Tom Waits- and Kathleen Brennan-penned title song: “I can’t stay here and I’m scared to leave.”

Baez has spent her whole life hymning the mutilated world, and mutilated it will remain even once she sings her last. Maybe that’s what she means by titling the album after a gesture of transience; maybe it’s an acknowledgement that, after decades spent singing against war and desolation, she’s ending her recording career with a song called “I Wish the Wars Were Over,” because of course they’re not. But the record’s deep melancholy waters her hard-won hopefulness, weathered and in full bloom: Eliza Gilkyson’s “The Great Correction,” the closest this album gets to a jaunt, imagines the day when the walls of Jericho crumble, a camel passes through the eye of a needle, and the darkest hour gives way at last to dawn. Nobody said any of this would be easy, and so a Josh Ritter composition exhorts us to “Be of Good Heart.” That same song voices a humility born of experience: “I never claimed to know it all,” she sings, summarizing decades spent bearing witness. “All I know is what I’ve known.” And there is resilience, too. Waits’ “Last Leaf”—originally done as a barroom lament with soul survivor Keith Richards—is notably more forceful here. Baez imagines herself a leaf that’s weathered every winter since Eisenhower; she’ll make room for the new shoots of green, but she won’t let go—not yet.

The risk with an album like this—intended as a last will and testament, reckoning with a world that’s in roughly the same shambles she found it in—is austerity. It was produced by Joe Henry, who is singularly gifted at working with septa- and octogenarian artists to generate works that expand their legacies, rather than Cliff Note them. He and Baez address the concern of an insular and self-serious album by steering straight into it, laying all their cards on the table: There aren’t many jokes here and no song that qualifies as a lark; just song after song that burrows deep into earnestness and empathy. It earns our trust through its candor and its sincerity; its cumulative effect is total disarmament.

Whistle Down the Wind stands among the most genteel Joe Henry productions; his inclination toward first-take immediacy, which summoned elegant swing on his Allen Toussaint sessions and hard-boiled grit on his work with Ramblin’ Jack Elliot, manifests here as gentleness. Drummer Jay Bellerose, whose rolling thunder is a hallmark of Henry’s production work, mostly offers gentle thumps and cymbal accents. Baez, John Smith, and Greg Leisz join acoustic guitars into a blur of finger-picked melody, while Patrick Warren’s piano and pump organ surface with crystalline romance. “Whistle Down the Wind” sounds at once earthy and windswept, born of this world but no longer tethered to it. “Another World” is skeletal and pulsing, Baez standing ragged and unsure at the song’s center.

She trusts the warmth and sadness of these songs to shine through, and they do. Baez sings with too much affection for any of these songs to lapse into cynicism, and too much weariness for any of them to sound like celebration. And so she is caught between this mutilated world and another, better one she can’t quite imagine; she’ll cling to this until she can’t, and then she’ll let go. In the meantime, Baez leaves us with a Zoe Mulford song called “The President Sang Amazing Grace,” set in the wake of the Charleston church shooting: “But no words could say what must be said/ For all the living and the dead/ So on that day and in that place/ The President sang Amazing Grace.” To sing in the face of sorrow is an amazing grace, indeed; a tender mercy that only a broken world can allow.

One thought on “Another Mutilated World: A swan song from Joan Baez”