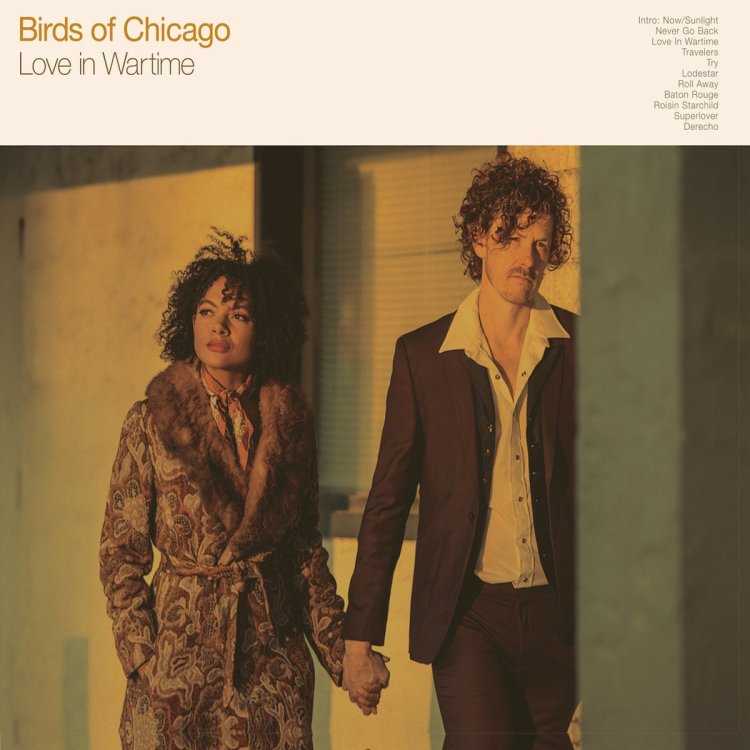 “There’s time for it all/ But no time to lose,” sings JT Nero on Love in Wartime, the second Birds of Chicago album in a row to be concerned with ticking clocks and the fierce urgency of now. It might as well be the album’s mission statement: Always brazenly empathetic and alluringly big-hearted, the Birds of Chicago wield their warm humanism with pugilistic fervor here, championing engagement in a world increasingly prone to despondency and drift. In their grittiest and most visceral album yet, they declare a state of emergency: We’ve only got so much time on this earth to fight for peace, love, and understanding. There’s no excuse to check out just because times have gotten tough.

The Birds– Nero and his wife/co-conspirator/vocal powerhouse/multi-instrumentalist Allison Russell–  make music that bridges pop hooks, folk earnestness, rock and roll energy, and gospel’s big-tent inclusivity. Their big break was 2016’s Real Midnight, an album forged in the fires of new parenthood and all its attending anxiety. The record portended wolves at the door, reminding us that the lives we build together all come with an end date. Nero and Russell greeted apocalypse with party tunes, vowing love amidst frailty, real commitment in a world where nothing lasts and nobody keeps anything.

Two years later, they’re releasing new music into a different world, one where it might feel to many as though real midnight’s come at last. Here’s an album for the morning after: Love in Wartime is about picking up and carrying on; it’s a soundtrack to the struggle, for love and for peace, for vision and for sanity. Though it’s not a concept record, it’s structured very much as an interconnected suite, opening with a brief instrumental prelude and doubling back on recurring themes—wake-up calls, resurrection, sojourners making their way through a world that’s not their home—and all the while it quietly rages against complacency. “We sat there and tried to remember our dreams,” the duo sings, their positivity rattled but not shattered. “No such luck, no such luck/ So then what, so then what/ There are songs to find and oh yeah, a baby to feed.” When idealism fails you, there’s still work to be done—life to live, neighbors to love— and any time spent moping is a luxury and a waste. So they’ve cranked the party tunes even louder.

The album feels conjoined to its predecessor, but also distinct. Real Midnight was cut with producer Joe Henry and his gang of ringers, its focus on the band’s cascading gospel harmonies, their rich command of pop and folk music vernaculars, their gentleness and generosity. Love in Wartime, recorded with the full Birds touring company and produced by Nero and Luther Dickinson, finds those harmonies sounding a little more ragged, the performances a little more kinetic and band-oriented, yet the album exhibits the same intimacy and candor that made Real Midnight catch fire. It’s a companion piece from a group that’s been put through its paces, their congeniality all the more convincing for how weathered it now sounds. This is a record built for the road, and the tightness in these performances reveals all the miles and all the shows that helped birth it. Indeed, the Birds have never sounded nimbler than here, hotwiring their songs to locomotive beats and florid keyboard grooves, always making it a point to keep moving: “Love in Wartime” rises from an organ’s conversational hum to a big sing-along chorus; “Travelers” is galloping folk that breezes through tight couplets with graceful efficiency; “Lodestar” rises from a whisper to a roar, one of several tunes where Nero’s words ultimately give way to the band’s mighty swell; album closer “Derecho” shimmies and sashays to a Mardi Gras beat.

The muscle and the directness in these songs mirrors the record’s themes of love as daily action and responsibility, even amidst disillusionment. It’s fitting, then, that the album’s first two singles are both swift kicks to the ass for anyone indulging in despair. “Never Go Back” is a scant two minutes of scruffy guitar riffs and sunny keyboard groove, punkish enough to stop with just a verse and a chorus, loose enough to include plenty of spirited woos and spoken French asides. Nero sings lead, and demands all or nothing—full-bodied engagement with the world in all its tattered beauty, or else what’s the point? (“I want all of your senses,” he sings. “C’mon, give ‘em to me!”) “Roll Away” is even punchier, and nearly as terse—rumbling country-rock with a handclap rhythm and thick harmonies. “I remember afternoons just waiting around to die,” it goes—but Love in Wartime is an album where the defeated find second chances: “I am not who I was and this is not that time now, cousin.” On other songs, the kick in the ass isn’t as swift, but it lands just as heavy. Listen to how the guitars scrape and moan throughout “Try,” a pained intervention for someone who’s thrown in the towel. “Try a little harder/ Give a little more,” the Birds sing, as though everything depends on it.

Love in Wartime resists cynicism, but it does acknowledge it. “We shook our heads in disbelief,” one song goes “as if there’s no blood in our streets/ as if there’s none of that old poison/ Hot in our veins.” The antidote is vulnerability. “Lord let me die before my child/ Prayed every mother far and wide,” Russell sings on “Superlover,” her voice frayed and her defenses down. It’s a spindly hymn that connects the album back to Real Midnight’s parental jitters, grounding the record’s uncertainties in something concrete and embodied. But a mother’s nervous, all-consuming love is a superpower, not a liability: “That’s a super love/ I’m a super lover,” Russell declares, finding strength in tenderheartedness and candor. And on the title track, she and Nero echo Kacey Musgraves’ indescribable wow: “You and I are here right now/ do you ever wonder how/ Many stars died just so that could be?” To be awake and alive, here and together is no small miracle—even in treacherous times. More than once, Love in Wartime references derechos, lines of intense storms that leave carnage in their wake. Nero and Russell sing like they’ve been through some storms before, and have learned to be joyful as a matter of intention, not circumstance. “Namaste, my derecho,” one song goes, the Birds standing ready for whatever comes their way. Even as the clock strikes real midnight, there are songs to be found, work to be done.