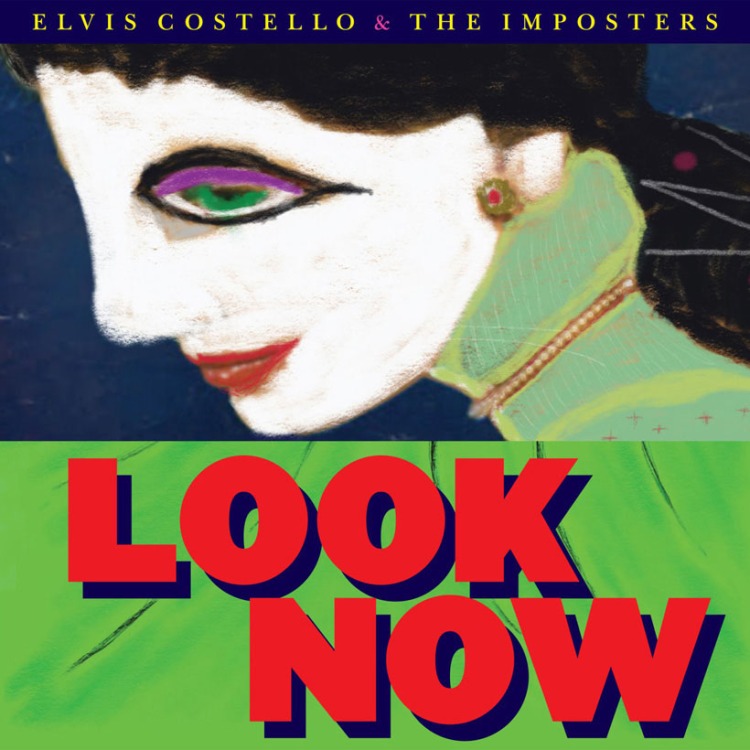 There’s a helpful antecedent for Look Now, the first new Elvis Costello album in five years—but it may not be the one you think. True enough: Costello spent the summer of 2017 revisiting songs from Imperial Bedroom, hoping that album’s baroque décor might prove a trailhead for further explorations, and Look Now does share some of that album’s lushness, its elegance, its crisp pop formalism. He’s also likened the new record to Painted from Memory, his winsomely melancholy and darkly romantic 1998 album with Burt Bacharach. Bacharach co-wrote a few songs here, all of which lovingly recall Painted from Memory’s brazen emotion and classicist structures. But the most valuable touchstone of all is Unfaithful Words and Disappearing Ink, the 2015 memoir where Costello consolidated a lifetime’s allegiance to the mechanics of song. Look Now synthesizes, deepens, and expands on ideas from earlier Costello albums, but more impressively, it feels like the musical self-portrait of a songwriter and record-maker who’s always been obsessively devoted to the particulars of his craft. It has the vigor and punch befitting a man who was raised on The Beatles; a sophistication that speaks to his moonlighting as an operettist; tight, tuneful constructions that affirm his adherence to Tin Pan Alley and the Brill Building in equal measure. It is masterful and peculiar: An album that builds on everything we know about Elvis Costello while revealing that he can surprise us yet.

Some of that baroque décor has been moved in from Imperial Bedroom, carefully re-arranged to underline emotions and accentuate tunes without ever adding clutter. “I Let the Sun Go Down” bottles whimsy and melancholy, flecked by brass and buoyed by Costello’s cheerful whistling; “Dishonor the Stars” is punchdrunk pop that builds into a sweeping orchestral chorus. Other songs find Costello slipping into his role as earnest piano-side crooner, balladeering with the warmth and sensitivity he mastered on Painted from Memory: “Photographs Can Lie” is anguished melodrama, “Don’t Look Now” a tender sketch of emotional intimacy, Bacharach anchoring both behind the grand piano. These reference points are merely the poles between which Costello unspools boundless color and imagination.

He made the album with producer Sebastian Krys, a Latin pop guru whose gift is finding the breathing room within lavish arrangements; it may be an album where Telecasters share space with celestas and jazz bassoons, but Costello and Krys keep things clear and punchy. Just listen to “Under Lime,” a champagne salute of an album opener, wrestling seven verses and one theatrical flourish after another into a tight five minutes of sleek effervescence. Its propulsion comes courtesy of The Imposters, making their first one-record appearance since 2008’s Momofuku. Drummer Pete Thomas and bassist Davey Faragher supply the swing, and Steve Nieve’s piano gives the song its sparkle.

Their muscle and finesse go a long way toward keeping Look Out visceral. They raise the heat on “Why Won’t Heaven Help Me,” bringing its percolating simmer to a boil, and their red-bloodedness leaves a few dents in the gleaming, airtight grooves of “Burnt Sugar is So Better,” written with Carole King. Regal horns lend elegance to “Mr. and Mrs. Hush,” but The Imposters manage to scuff things up a bit with Thomas’ flurry of cymbals and Nieve’s clenched piano groove. They’ve aided and abetted Costello’s genre-curious eclecticism for decades now, and they’re as game to offer genteel support on “Don’t Look Now” as they are to rumble on “Unwanted Number,” a garage rock thumper festooned with symphonic swirl and snappy girl-group harmonies.

Mastery of form is nothing new for Costello, but Look Now is particularly effective in plumbing the emotional depths of familiar grammars. “Suspect My Tears” is a string-swept mountaintop ballad in the Motown tradition, with lyrics both bitter and empathetic in their chronicle of emotional manipulation (“you’re not the only one who can turn it on,” the protagonist says of his crocodile tears). “Stripping Paper” returns to the domestic conceits of Painted from Memory, here using wallpaper removal as a metaphor for marital dissolution; every strip that’s removed is a painful memory, once so bright but now faded and torn and ready for the waste bin. The song’s silent agony is all the more devastating for its mannered exterior. In the past Costello has sometimes been clever to a fault, but here deploys his wit with strike-team precision, both in the words as well as the arrangements; notice how much “I Let the Sun Go Down,” which surveys the wreckage of Brexit and mourns the slow crumble of Britain, recalls the pastel-colored music hall of Sgt. Pepper, a landmark of English nostalgia.

There are dark moments here: “Under Lime” brings Jimmie—the wannabe London cowboy from National Ransom—into the #metoo era, unmasking him as a predator passing for a gentleman. Costello dispenses with him cheerfully (“it’s a long way down from the high horse you’re on”), and lingers long on his compassion for Jimmie’s victims. In “Photographs Can Lie,” a daughter is shattered at the glimpse of an old family snapshot, ruing that her father isn’t the man she’d always imagined him to be. “He’s Given Me Things,” perhaps the creepiest closing song of any Elvis Costello album, is a twisted Gosford Park scenario set as a haunted, stately ballad: Here a mistress is elevated to privilege through a tryst with a rich man, and the tangle of shame, sex, and class warfare that ensues is worthy of a Jarvis Cocker album. (“He has an awful lot of money,” the woman says of her redeemer. “The past can be bought—and then erased.”)

Yet as Costello’s wit matures into wisdom, his once-legendary snarl has been replaced with a deep well of compassion: For the darkness at the edge of these songs, there’s also real empathy for the characters. “Unwanted Number” is a song about an unmarried mother navigating a thicket of slanderous rumors; Costello says he initially saw her as a victim, but his assessment changed after the song was finished, and he came to see it as a celebration of the selfless love she gives to her child, despite receiving so little love of her own. And in “Don’t Look Now,” a wife trembles in vulnerability at the thought of her husband’s stare, even as she wants so badly to be the object of his affection. The act of looking is a big part of what the record is about, even its title exhorting the investment of our gaze and consideration; in its sumptuous surfaces and empathetic songs, Costello proves again and again the value in paying attention.