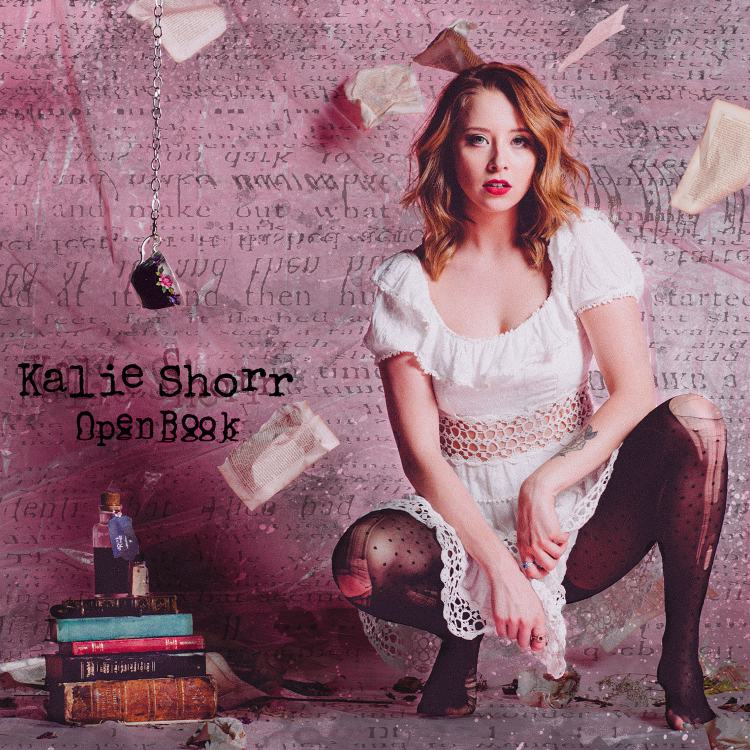 Kalie Shorr, a 25-year-old singer and songwriter from Portland, Maine, starts her first full-length album with something pitched halfway between a promise and a warning. “Don’t go asking questions that you don’t want answers to/ I’ve got too much to say, and I’ll tell it all to you,” she pledges, and it won’t take long for you to realize just how much she means it. She wrote the songs on Open Book— its very title a commitment to transparency— amidst the ruins of what she calls “the worst year,” one marked by romantic collapse, mental health struggles, and the sudden death of her sister. That’s an awful lot of hardship and tragedy packed into a small time frame, and the 13 songs on Open Book often sound like they’ve exploded from a pressure cooker; Shorr pulls no punches and spares no detail, documenting her year from hell with bracing candor, defiant jokes, narrative perspicuity, and persuasive psychoanalysis. “I don’t really like dating assholes/ But I do it ‘cause I have a weird relationship with my dad,” she admits in the opening couplet of “Gatsby,” fast-talking a few extra syllables into her meter, as if the song can barely contain the wild honesty of her lived experience. Over and over, Open Book lays it all on the table; it bursts at the seams. It sounds like nothing so much as the work of a gifted singer/songwriter who’s long had much to say, and can’t hold it in any longer.

Shorr is a country singer, though she’s never any more or less attached to genre tradition than she needs to be. Her version of roots music extends back no further than to the supercharged, chart-topping country of the 1990s, and Open Book is generously adorned with arena-filling drums, red-hot guitar licks, doleful pedal steel, and sawing fiddles. But if you want to triangulate her sound, you only have to go back as far as the previous generation’s great women of country: Shorr invites passing comparison to early Taylor Swift (for her diaristic clarity), Kacey Musgraves (for her attention to detail and her careful rendering of small-town life), perhaps even Miranda Lambert (for how she pivots so easily from hell-raising to introspection). But the active ingredient in her songwriting is an abiding love for cheap-sounding pop-punk and mopey emo, idioms that aren’t broadly fashionable but offer her a language for direct emotional appeal. The most irrepressible moments on Open Book come when she allows these reference points to mix and mingle. “The World Keeps Spinning,” a song for her sister, has weepy steel guitar and a bruised, blood-letting chorus. The perfectly-titled “Angry Butterfly,” where she announces herself “a ballerina wearing combat boots,” writhes and seethes in grungy dissonance, but it’s got gossamer banjo latticed on top.

You never feel like these songs are very far removed from personal experience, but that’s not to say they’re unvarnished journal entries, either. Shorr tempers her eagerness to share with immaculate songwriting formalism, and several of these songs come with the kind of pitch-perfect premises that your average country song-slinger would trade his best pickup truck and a full case of domestic beer for. Listen to “Messy,” about two neat-freaks who look down their noses at other couples who allow any imperfection or discord to show; the twist, of course, is that their immaculate surfaces hide an emotional shit show. “Thank God You’re a Man,” a swaggering song of seduction, picks up where Ariana Grande’s “God is a Woman” left off; it brims with the confidence of a woman who knows she can pull a few hallelujahs out of even the most resolute nonbeliever. Best of all is the righteously petulant breakup song “F U Forever,” a carbonated cocktail of honky-tonk twang and mall-rat thrash. It includes a few lyrics that any good psychotherapist would surely categorize as breakthroughs (“I’m just a mirror reflecting/ and you’re just an asshole projecting”), but the smartest thing about it is how Shorr saves her one epic profanity for an uproarious punchline.

Indeed, her songs are witheringly funny, except when they aren’t. Some of Open Book’s richest turns of phrase are mirthlessly clever, like a couplet from “The World Keeps Spinning” that perfectly captures the solitude of grief in a world of indifference: “I drove by a wedding on the way to your funeral/ I bet the bride was happy that the weather was beautiful.” The pounding “Lullaby,” written in the wake of a breakup, moves from consuming sadness to self-determination in the span of a single chorus (“I’m singing one last lullaby and I’m/ putting this to bed.”) Part of what makes these songs so compelling is the believability of Shorr’s self-appraisal; she plays some of her therapist’s-couch asides for laughs (“looks like my abandonment issues got the best of me again”), but many a truth is spoken in jest, and Shorr is unsparing in her assessment of how her year of tribulation turned into something of a self-fulfilling prophecy. Listen to the old-timey soft-shoe gait and and casual one-liners in “Gatsby,” a song about turning to self-destruction as a way to avoid facing down the demons within; Shorr delivers bleak lyrics from behind a shit-eating grin, which is the whole point. There’s no such performative zeal in “Escape,” which quietly offers the album’s most sobering turn; here Shorr chronicles various drugs of choice used to “sweeten up the lows” before admitting that her own defense mechanism is running away. It’s a harsh confession that belies the album’s confrontational spirit. Surely it’s no accident that Open Book ends with an antagonistic rager; in “Angry Butterfly,” Shorr’s crawled back from hell with a resolve forged in fire, ready to say her piece and possibly bust some skulls. Its tantalizing promise is that, for as much as she says on this album, she’s really just clearing her throat.