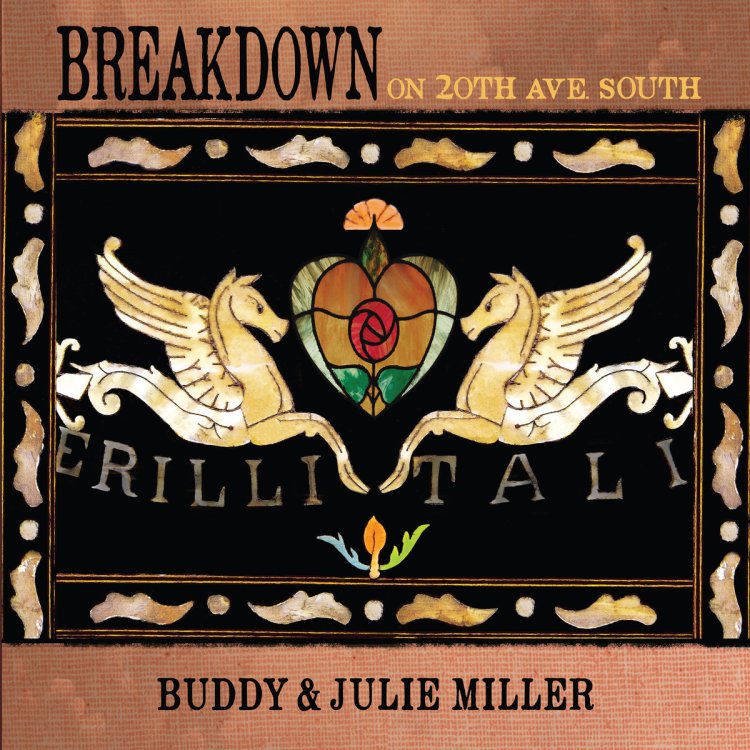 During seasons of heartbreak, it’s just like the old song says: We all need somebody to lean on. But what happens when the person you lean on is also the one who did the heartbreaking? Bill Withers didn’t offer a contingency plan, but Buddy and Julie Miller have it covered on a new album called Breakdown on 20th Ave. South. The very title suggests that the 10 years elapsed since their last record haven’t exactly been idyllic, and the songs— many of them thrumming midnight blues, palpable with conflict and unease— offer confirmation. Several gingerly run a finger along domestic wounds still tender to the touch— hurt feelings, stony silences, resentments left on simmer just a little too long. And there beyond the windowsill, the world roars its violence and hums its indifference. It’s enough to make a person want to scream, but who will hear it, and who will care? The Millers voice those questions right from the jump: “In the night/ who hears the words coming out of your mouth?” Heartbreak comes sooner or later, these wise songs counsel– so who do you lean on? Who will receive your complaint, your confession, your psalm of lament? What are you doing to keep the lines of communication open?

It so happens that 20th Ave. South is the couple’s real-life Nashville mailing address, and while it’s generally judicious not to assume too much autobiographical intention from any songwriter, Buddy and Julie have been candid about some of the personal struggles that informed their return to recording. Maybe you know the backstory: For many years the husband-wife duo were among the most prolific and beloved power couples in the Americana scene, lauded both for their solo albums and the music they put out as a pair. (2001’s Buddy and Julie Miller is rightly regarded as a masterpiece.) When the cruel effects of fibromyalgia forced Julie to back away from public life, Buddy eased into a second career as producer for various luminaries, helming rewarding records by Patty Griffin, Richard Thompson, and Solomon Burke; most commendable of all is Robert Plant’s ragged and lovable Band of Joy. But the couple’s musical collaborations dried up, and understandably, Julie felt left-out and adrift. As the Millers tell NPR’s Jewly Hight, it took a little time for Buddy to realize how much distance he’d allowed into their marriage, and for Julie to express how much she felt wounded. The very existence of a third Buddy and Julie record– heralded by fans as borderline miraculous when it was announced earlier this year– attests that their lines of communication ultimately led to a reconciliation, though the songs suggest that it’s all an ongoing process. “Everything is your fault in the whole wide world,” Julie deadpans in one song; perhaps it’s a hyperbolic reenactment of a lovers’ spat, but then again, many a truth is spoken in jest. More assuring is the riotous “I’m Gonna Make You Love Me,” the closest this record comes to the playful energy of classics like “You Make My Heart Beat Too Fast.” “You’re gonna love me, even when you think you don’t,” Julie smiles, affirming what every long-married couple knows: that love is as much about action as it is emotion, and on any given day may have little to do with how you’re feeling.

There’s a strange weather bottled here– the particular air of a couple who have hurt and healed together, and who’ve been reminded that sustaining a marriage requires daily engagement. Even the record’s sound bears witness to this. To accomodate Julie’s poor health, Buddy set up equipment in the couple’s bedroom, meaning the low-key, homemade feel of these songs is no put-on. Where previous Buddy and Julie albums have come with just the right amount of polish, and supple support from studio pros, this one’s all the Millers, leaning into an intimate simplicity. “Unused Heart” and “Breakdown on 20th Ave. South” both stick to the low embers of the blues, conjured by little more than the hiss and fuzz of Buddy’s electric guitar. There’s some percussion overdubbed here and there, but not the crisp pop of a snare drum or the ring of a hi-hat; on “I’m Gonna Make You Love Me,” the muffled thump could almost be someone knocking against a bedframe or a dresser drawer. The record hums with an appealing domesticity, and at times its crude clatter also suggests something of the caustic emotions that swirl around the album’s edges. Listen to the guitar strings and rattling tambourine bleeding into each other on “Feast of the Dead,” a grey smear of mourning. Of course, the highlight of this and any other album from the Millers is the blend of voices; Buddy’s cowboy croon remains a perfect foil to Julie’s impish energy and free spirit. In other words: They were made for each other, and their harmonies inject clinical-strength joy amidst the album’s sorrows.

One possible comparison is to the Over the Rhine album Drunkard’s Prayer: Both records find musical couples giving a long hard look at a relationship they may have been taking for granted, and at least glancing at the possibility that all of it could crumble. And, both records chronicle breakdowns but persist into breakthroughs, talking things out and laying the groundwork for reconciliation. Indeed, Breakdown is remarkable in its candor, and though the Millers have always favored plainspeak, they’ve never recorded songs as disarming or as brutal as some of the ones here. Most disarming: The mournful “Secret,” Buddy’s breakup backup plan, where he hopes he can at least hang on to his privacy (“don’t betray my confidence,” he pleads). Most brutal: The spare and spectral “Unused Heart,” where Julie cries out in the night and finds an emotionally distant partner by her side (“you might as well be made out of wood,” she smirks). “Nothing can be possessed but the struggle,” Flannery O’Connor once advised, and by taking ownership of their hardship the Millers create a meaningful context for their songs of union: “Spitting on Fire” affirms a love that can be as gentle as a spring rain or as ravenous as a hurricane, while “Til the Stardust Comes Apart” is a song of devotion so crisp and clean it could pass for a songbook standard.

Speaking of context, there are a handful of songs on the record that look beyond the Millers’ scenes-from-a-marriage to survey what’s happening in their neighborhood– and sometimes what they find is a world imploding on itself. That’s certainly the implication of “War Child,” where the next generation’s only inheritance is bloodlust and despair; the song is punctuated with the militant rumble of a snare drum. Amidst the jingle-jangle of “Feast of the Dead,” Julie sifts through the ash and dust of a dying planet, finding glimmering slivers of wisdom (“may we love while we’re in the light,” she urges, because time’s a-wastin’). The most evocative scene-setter of all is “Underneath the Sky,” where Julie hungers and thirsts for righteousness– “hard to find in a place like this,” she admits. Like Nick Cave, she’s singing the abattoir blues, and like Bob Dylan her heart’s already in the Highlands; “I want you to take me somewhere that truth and justice kiss,” she sighs, a simple and effective prayer language. It’s an important framing for the marriage songs, highlighting the high stakes and real danger of a world where moth and rust destroy, and where anything and everything falls apart.

These are heavy concerns, but Julie Miller’s never been involved with a record that she didn’t enliven with buoyant Christian witness– and here the writer of “All My Tears” offers one of her most striking spirituals yet. Amidst Dylan-esque folk chords, “Thoughts at 2am” awakes with worry but finds comfort in the everlasting arms. “The Author of compassion has our pain beneath his skin/ and so the whole wide world upon his fingertip does spin,” Buddy and Julie sing together; like every sparrow falling, like every grain of sand. We all have a midnight breakdown sooner or later– but what this song supposes is, maybe there’s always someone listening after all?