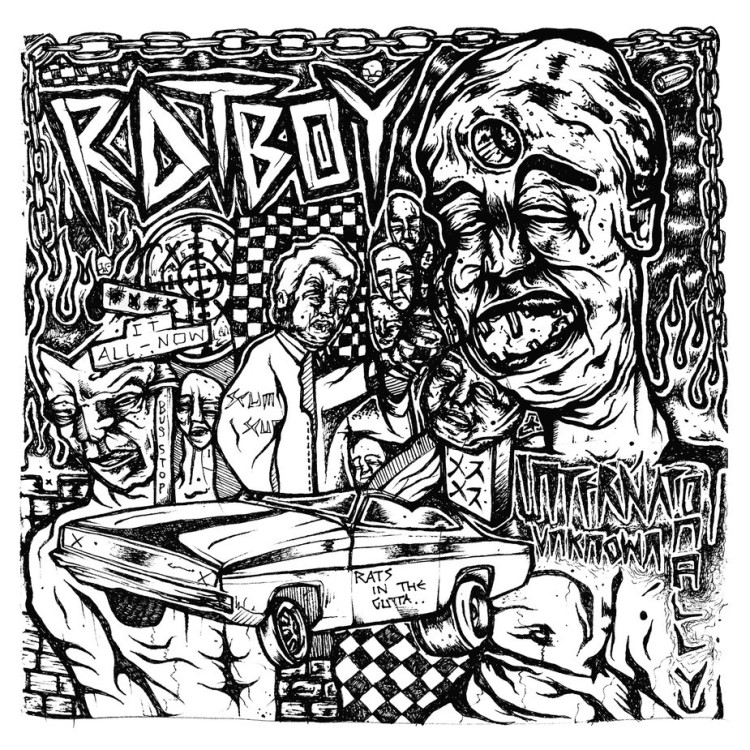 Born 10 years after Licensed to Ill and just two before Hello Nasty, the UK rapper Jordan Cardy is too young to claim first-generation Beastie Boys standom. Thank God for YouTube. As Cardy puts it, he was “born lost,” aimless and adrift, his only inheritance a chip on his shoulder and a pervasive sense of disenchantment. He sought solace in the skate park, passing long hours laughing and talking and smoking with his friends, eventually falling down a rabbit hole of 90s rap videos—the Beastie Boys his gateway to an omnivorous, genre-curious aesthetic with pop, reggae, and punk among its tributaries. What started as a boondoggle quickly became a regimented apprenticeship: Before making Internationally Unknown—a joyful and pugnacious record released under the name Rat Boy—Cardy built a studio space in immaculate imitation of the Beasties’ famed G-Son; he invested in 90s-vintage recording equipment; he even got a Dust Brother in the studio to shepherd him through the album’s creation. It’s hero worship elevated to an art form, but the masterstroke of Internationally Unknown isn’t that it gets the period details right; it’s that it rearranges those details into something that nods to the past while also sounding bracingly contemporary. To that end, Cardy also enlisted Rancid’s Tim Armstrong to keep things ragged and muscular, and the result is a boisterous set of songs that borrow equally from the dog-eared terseness of punk, the anti-authoritarian bent of hardcore, the good-natured slackerdom of skater culture, the loose-limbed storytelling of 90s hip-hop, and the prickly energy of second-generation New Wave bands like No Doubt, all filtered through the dankness and the lo-fi murk of the Beastie Boys’ Check Your Head-era prime. It’s an album that reappropriates the DIY ethos of the 70s with the porous cross-contaminations of the 90s to tell a timeless story in a fresh way—a story of disaffection and alienation; of being young and maladjusted and having zero fucks to give.

Cardy proves his punk bona fides right out of the gate with “Chip on My Shoulder,” a barrage of choppy electric guitar riffs and pummeling drums that could almost pass for a Clash outtake were it not for Cardy’s scruffy patois and his clever interpolation of a lurching hip-hop beat. It’s a bottle rocket of a song, a flash fire of incandescence and rage that burns for a hot two minutes and then dissipates, and it sets the template for the album’s blazing hardcore intensity. Not that there’s anything formulaic about Cardy’s music, which exhibits boundaryless imagination even as he plays with familiar forms. He can be anthemic when he wants to be, as on the stadium-shaking title track, designed to have a crowd full of lads howling their alienation in perfect harmony. He’s just as compelling when he just lets loose with breakneck abandon, as on the thrashing “I Wanna Skate,” rapturous escapism manifest as pure speed. Elsewhere, he exhibits a gift for songs that are languid with atmosphere but also forceful and direct; the quasi-theme song “My Name is Rat Boy” is a warped take on dub, simmering with woozy organ, turntable hiccups, and double- and triple-timed raps, but what makes the biggest impact is its slamming momentum. He can handle lighter stuff, too: “Follow Your Heart,” a shimmering roller-rink confection, is almost featherweight; a sun-soaked horn section connects the song back to 90s ska bands, but what impresses the most is Cardy’s easeful way with a pure pop melody. His calling card is rowdiness that fudges the line between aggression and jocularity—“Don’t Hesitate” and “So What” are jock jams brimming with attitude, humor, and sly stylistic ambivalence—but the album’s sleeper highlight might be “Night Creature,” glimmering trap-reggae that demonstrates Cardy’s propensity for impressionistic studio effects. A hook from Aimee Interrupter channels prime Gwen Stefani better than Gwen Stefani has done in years.

These are songs of enormous freedom, yet Rat Boy’s narratives are mostly about feeling trapped. With a rangy storytelling approach that’s closer to Slick Rick than to the rollicking jokiness of the Beasties, Cardy weaves tales of young men who are born into cultural isolation and economic insecurity; “raised on a diet of free porn and stale bread,” inundated with “murder on the news,” “stuck in a dead town,” only ever going in circles. Cardy’s repping for a lost generation, and occasionally his perpetual middle finger to the establishment (“I never wrote a song for the businessmen!”) runs parallel to Joe Strummer’s revolution rock. And yet he’s no insurrectionist. Mostly, he just wants to skate and jam with his homies (“thank fuck we found each other”), maximizing pleasure even as he teeters on the abyss. His is a worldview where hedonism and nihilism are two sides of the same coin, and where the only real meaning is the meaning you create with the members of your tribe. In that context, the be-true-to-yourself sentiments of “Follow Your Heart” have a tinge of sadness to them; Cardy’s betting everything on his inner voice because all the other voices have let him down. “I Wanna Skate” posits motion as salvation and “No Peace No Justice” braces for a ruckus in the streets, but it’s “Don’t Hesitate” that best codifies the Rat Boy ethos. “We’re here right now so choose your fate,” Cardy admonishes, choosing joy even with the world burning all around him. He may have been born lost, but he’s learned to make the most of it; Internationally Unknown is where he finds himself.