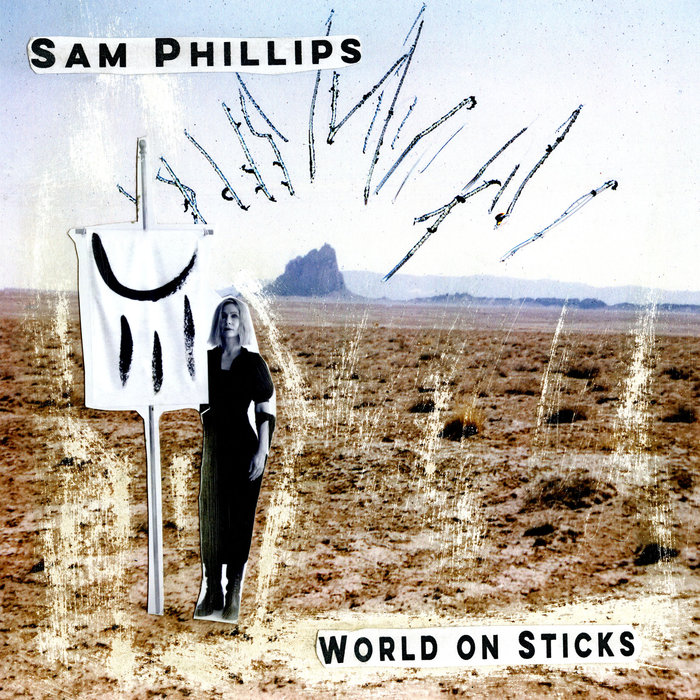 Some songwriters you picture standing on stage holding an acoustic guitar, or dutifully stationed behind a grand piano. Sam Phillips you might imagine wearing a headlamp and wielding a pickaxe. On her many lovely and distinctive albums, truth and mercy lie sparkling and precious, buried beneath rubble and mire, there for anyone willing to roll up their sleeves and extricate them. “Dig, baby,” she exhorted us on 2004’s A Boot and a Shoe. “Let’s excavate the surface.” And now, on her new World on Sticks, she declares her intention to “dig in the dirt for light”—a line so quintessentially Sam Phillips, it might as well be the title of her memoir. She has always believed in deeper realities and unseen good; she has always been about the business of excavation.

World on Sticks joins a lineage of albums that haul that unseen good to the surface, mining grace notes from the most unexpected places. On The Turning, it was a crisis of faith; on A Boot and a Shoe and Don’t Do Anything, romantic dissolution. For her first set of songs since 2013’s Push Any Button, Phillips is writing in a more prophetic office, surveying the ravaging effects of unchecked prosperity and unencumbered freedom. It’s an album about how greed and capital strangle our connections to each other, to the environment, to any broader sense of mystery; about how limitlessness can be imprisoning, and desiring more and more satisfies less and less. “I want what I can’t have,” coos Phillips in a slinky, rattlesnake groove called “Continuous Limit,” dissatisfaction springing eternal. But the diagnosis is followed by a word of wisdom: “You don’t have to make a living when you’re alive/ You don’t have to make a killing before you die.” At every turn, the album resists materialism as a dead-end and a mirage; it sifts through ephemera for truth that will last.

This is weighty subject matter, but Phillips has made a career out of defying gravity. A specialist in pure pop, she has an easy way with melody that lends many of her albums summer soundtrack status, while her ear for breezy vocal hooks has won her steady work composing for shows like Gilmore Girls and The Marvelous Mrs. Maisel. Her songs are always deliriously tuneful and terse, but what she never gets enough credit for is her role as the preeminent pop tinker. Ever since she started producing her own records Phillips has displayed an impish zeal for playing around with different tones and colors, and on World on Sticks she schemes a high wire balancing act between the tight-knit band alchemy that made Push Any Button crackle and the lush orchestrations of a string ensemble. The band includes Chris Bruce on guitar, Jennifer Condos on bass, and drummer of drummers Jay Bellerose on all things that shake and rattle; the strings are arranged by Eric Gorfain and played by The Section Quartet. It’s an alchemic match-up that combines the punchy energy of rock and roll with the intimacy of torch songs, and it results in visceral pleasures as well as impressionistic effects. “World on Sticks” is a study in melody, groove, and noise, Bellerose unleashing some of his most thunderous playing, punctuated by squalls of loose electricity. The bleary “Teilhard,” meanwhile, is a wind tunnel of rustling acoustic strings and clanking percussion. On the mournful “Tears on the Ground,” strings fall like shadows across a winding road, while on “Roll ‘Em,” a song about a sociopath, they create a black hole down which the singer disappears. All of these songs are uniquely evocative; all are impeccably succinct, hook-filled, and buoyant.

They chronicle failed connections, intangible realities all but abandoned to material concerns. There are lost connections to the natural world; on the spare and urgent opener, “Walking Trees,” Phillips contrasts the patient wisdom of the planet to the rootlessness of its inhabitants: “If we could find one place, we’d grow the roots down/ But we’re like walking trees/ We can’t stay in the ground/ If we could always keep moving and never stay where we are/ We’d have to hold to the underground to reach up to the stars.” (Remember on Fan Dance, when she sang that “God is growing underground”?) There’s also “Tears on the Ground,” which mourns for a world that can only endure so much negligence and abuse: “The Earth has fever in her angry eyes/ Fires make the waters rise/ As we’re watching her gardens die/ The future’s falling from our eyes.” Phillips’ songs cast our lost connection to the world around us as an act of profound self-destruction. But there are also songs about being lost to the self; “Roll ‘Em” is a dark confession of ruthlessness, the frank admission of someone who’s willing to do whatever it takes to get what he wants; the plucky “I Want to Be You” is just as disturbing, a dispassionate song of self-estrangement. All of these songs are, on some level, about lost connection to objective reality itself, but none more explicitly than “How Much Is Enough,” which quietly rages against our era of epistemological murk: “Someone keeps giving out the wrong numbers/ We’re not supposed to know what’s true.”

Phillips’ lyrics are littered with signs of the times—or “signposts in a strange land,” as she once called them. “American Landfill Kings,” about an empire built on garbage, seems at first like a return to the moral witness of “Black Sky” and “Same Changes,” withering blasts of conscience that Phillips has largely backed away from in favor of songs that riddle and tease, suggest and provoke. Yet even a song like this one, with its sinister hurdy-gurdy rhythm, is scalpel-sharp in its diagnosis; it’s a snapshot of a culture of hoarders, where an obsession with collected junk reflects internal entropy and disarray. Its humor is mirthless and bleak—but remember Phillip’s mission statement: She’s digging in the dirt for light, and on the album’s final song she unearths some. It’s hard to hear the string-swept benediction, “Candles and Stars,” without thinking of A Boot and a Shoe’s “Reflecting Light,” maybe the most cherished of all Sam Phillips songs. Both are about the paradox of grace, how it can only be channeled through flawed and broken vessels. But where she had “worn out the world” on that earlier song, here she has no such luxury; on a planet cannibalizing itself, our only hope lies in reconnection. Atop stately piano and thumping percussion, Phillips sings: “If only with candles and with stars/ and broken light from dreams like ours/ we will still find the way through/ to love.” The song is just a glimmer shining through rubble– the kind of light Phillips has spent her entire career digging for.

3 thoughts on “Dig in the Dirt for Light: The surprising excavations of Sam Phillips”